Overcoming A High-Risk Pregnancy To See My Son's Smile 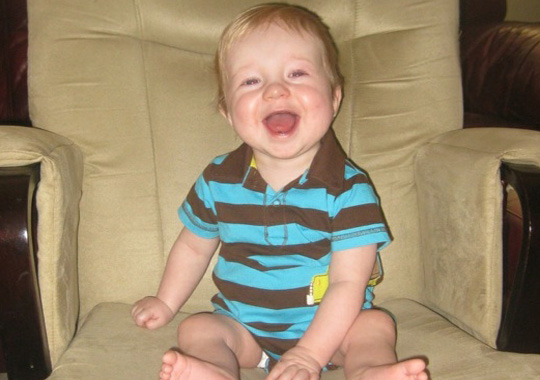 Its been almost a year since our beautiful baby boy was born but Cooper's time in my belly was neither easy nor a sure thing. At 20 weeks pregnant, when I went in for my anatomical scan, we got more news then just the sex of the baby. I could tell something was wrong when the technician began doing an echo, because as a nurse I knew that this test isn't typically performed for healthy pregnancies. At just 20 weeks gestation, Cooper was diagnosed with hypoplastic left heart syndrome, or HLHS. To say the diagnosis was a shock would be an understatement, but my medical background and level-headedness kept me focused enough to make an informed and careful plan. We decided to seek treatment at the Fetal Center at Texas Children’s Hospital because it is within driving distance of our home and, from what we found out researching, 1 of the 3 best best hospitals in the country to treat HLHS. Although we had planned to seek fetal intervention, complications arose that no longer made us a candidate for the surgery. So, I was forced to remain calm and make yet another plan. The plan was to get an apartment near the Texas Medical Center so that Cooper and I could be monitored very closely and to be nearby if I went in to labor. Due to the high-risk state of my pregnancy and Cooper’s delivery, it was very important that I be close to the Texas Children’s at all times leading up to delivery. Additionally, it was decided that I should have a scheduled delivery so that all necessary teams could be available if needed. Then, there I was, just a day before my scheduled delivery and my water broke. No matter how hard I tried, Cooper didn't want to stick to any plan. Cooper was born vaginally at 9:15 pm on May 17, 2011 and the delivery went much better then anticipated. We were able to spend time with him that night and the doctors decided he was stable enough to hold off on surgery until the morning. The moment when it hit me that Cooper was going to be OK after his surgeries was when we finally got to go shopping for him! We hadn’t bought anything while I was pregnant because we were so occupied with getting Cooper the best treatment, but now that he was on the road to recovery safely at the Texas Children’s NICU, we were ready to spoil our little boy. We spent the first 2 and 1/2 months of Cooper's life in Houston before we were able to bring him home. And now, almost a year later, Cooper has had his second surgery from the wonderful Heart Center team and is healthy, normal baby boy with the best smile! He will have the third and final surgery in a couple years but for now we are abundantly grateful to see our little Cooper smile.