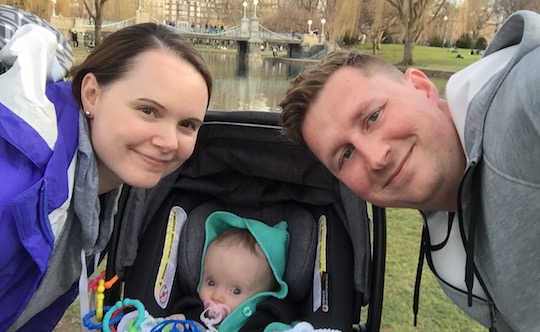 It has been a very long road for my husband, Tony, and I to have children. After five years of unexplained infertility that included many tests, medications, fertility treatments, multiple rounds of IVF and, on top of that, two failed adoptions, we found out I was pregnant. We couldn’t believe it! It truly was a miracle.

Things got real, real fast when we received a call from our OB a couple days after our 16 week appointment, saying my AFP blood test came back abnormal and she wanted to refer me to maternal-fetal medicine for an ultrasound on our miracle baby. We went in the next day for the ultrasound and received the news our baby girl had spina bifida.

The way we were told is something I can never forget. The ultrasound tech who was doing the initial scan said flippantly, “Yeah, your baby has spina bifida.” And a little after, “The brain is underdeveloped.” My husband and I were in shock. I immediately started crying. When she was done, she said simply, “I’m sorry,” and left the room.

We sat there crying, trying to understand what this all meant. She made it sound so hopeless. To this day, we’ve never forgotten the words of that ultrasound tech. But she was wrong; it wasn’t hopeless.

A short time after, the perinatologist informed us our daughter had myelomeningocele, the most severe type of spina bifida. She asked if we would be interested in finding out if we were candidates for fetal surgery. She explained some of the benefits, and we said yes. That same day, our perinatologist contacted Texas Children’s Hospital to see if we were potential candidates.

A couple days later, I received a call from Carol, a nurse coordinator from Texas Children’s Fetal Center at the Pavilion for Women. She discussed the criteria for the surgery, and the tests that were required to determine if we met the criteria. Talking to Carol immediately put me at ease. She was comforting and reassuring at a time when I needed it most. She attempted to answer my many questions; and for the answers she didn’t know, she sent messages to the surgeons to call me. Within a few days, I had received calls from both the neurosurgeon, Dr. Whitehead, and the OB, Dr. Belfort, to discuss the specifics of the surgery, the outcomes they had and to answer more of our questions. Everyone we spoke with was incredibly thorough and generous with their time. They answered all of my questions, and believe me, I had a lot of them.

We then eagerly awaited our appointments to find out if we were candidates. In the meantime, my husband and I tried to learn as much as we could about spina bifida.

One of the requirements of having the surgery at Texas Children’s Pavilion for Women was after the surgery we had to remain in Houston within a certain distance of the hospital for the remainder of the pregnancy. The surgery had to be performed by 25 weeks 6 days, so that would mean picking up and moving to Houston for months. At first, this was something my husband and I were trying to find a way around. So my perinatologist contacted the other hospitals around the country that performed this surgery to see if all of them required us moving there for the rest of the pregnancy, and if we would be candidates. It’s a very short list, as there are not many hospitals in the country that perform fetal surgery. However, due to the fact I also had fibroids, I was ruled out as a candidate at all of the other hospitals. Texas Children’s was the only hospital in which fibroids wasn’t an exclusion criteria. So there it was, Texas Children’s, to their credit, was the only one willing to take us on.

I think it’s also worth mentioning that I’m a nurse. So my learning curve was a little less, and frame of reference for everything a little higher. Having a health care background helped provide a good foundation for the medical terms that were used, a basic understanding of the procedures, and why they were doing what they were doing. The flip side to all this though, is  throughout this process knowing more meant knowing more, and that meant knowing what to worry about. Plus, I wasn’t going through this experience from the perspective of a nurse; I was going through this as a mother and as a patient, which is completely different.

That said, I knew very little about spina bifida up until this point, and there was, and still is, so much to learn.

On Aug.10, 2016, we went to Texas Children’s to begin the process to find out if we were candidates for fetal surgery. Over the course of the two days, we had blood work, ultrasounds, a MRI, an echo on our baby’s heart, an amniocentesis, met with a genetic counselor, and met with the team of surgeons who would be involved in the surgery. To say it was overwhelming is putting it lightly. At that point, I was 21 weeks 3 days.

My husband and I went into those appointments with the attitude that we wanted to learn everything we could about our daughter from all of the tests. Only then would we be able to make the most informed, and best decision for her. We were originally told by our perinatologist the anatomical level of the lesion was S1 to S3. We were told it was very low, which was extremely positive. To be candidates for the fetal surgery, the level of the lesion had to start S2 or above. The reason being, is if it is below that, then the benefits of the surgery don’t outweigh the risks.

We went into those appointments thinking the level of her lesion may not be high enough to justify taking all of the risks that came with the surgery. However, after having the MRI, the surgeons told us the anatomical level of her lesion was L2 to L4 and the functional level was S1 to S3. In short, her functional level was better than her anatomical level. If we opted not to have the in-utero repair of the lesion, the nerves would be exposed longer to the amniotic fluid and her functional level could deteriorate. That was a game-changer for us.

Now that we knew we were candidates, we had to make the decision if we were going to go through with it, and if so, which surgery we would opt for.

The standard of care for an in-utero repair of myelomeningocele spina bifida is an open repair; however, Texas Children’s was also performing the surgery fetoscopically. In an open repair, an incision is made in the abdomen, and then into the uterus through the amniotic sac to access, then close the opening in the baby’s back.

In a fetoscopic repair, an incision is made in the abdomen, and the closure of the opening is done with ports that are inserted into the uterus. It was still considered experimental, but they had a lot of success with it, and it carried many advantages the open repair did not.

Deciding whether or not to have the surgery, and on top of that, weighing the pros and cons as to which type of procedure to have, was the most difficult decision I’ve ever had to make.

Ultimately, we decided to do the surgery, and to have it done fetoscopically. The surgery was scheduled for Aug. 31, 2016, three weeks after first stepping foot into Texas Children’s.