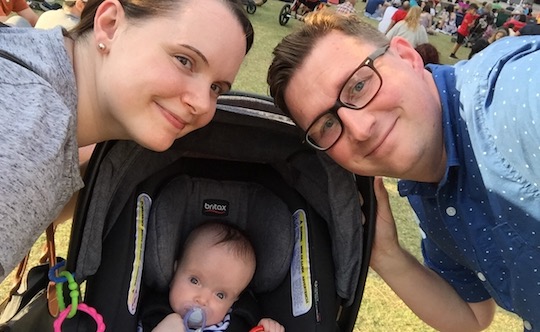 I tried to put the surgery out of my mind and focus on the logistics of moving to Houston. And that did help somewhat, but as the days got closer, the more and more scared I got. Before I knew it, it was the morning of the surgery.

We arrived to the hospital a little before 6 a.m. They got me back to a room to change into a gown, hooked me up to the monitor, started my IV and got me checked in. A little after, my epidural was placed. The anesthesiologist, surgeons and Carol came to check on me one last time to see how I was doing prior to going back to the OR. I was very scared and anxious, but also felt very determined and sure I was doing the right thing. The surgery wasn’t a routine surgery, that’s for sure. It carried many risks, for both myself and my baby. One of the risks of the fetal surgery is it can increase the chance of premature delivery. This was one of the things I was most scared of, that I would wake up from the surgery and be told they had to deliver my baby at 24 weeks 3 days.

Fortunately, the surgery went well. From the surgical team’s perspective, as well as it could have gone.

So there it was; it was done. We did it. Now, there’s nothing else I could do other than pray for her to be strong, and that she stayed in there as long as possible.

I stayed six nights in the hospital. The first couple days completely confined to the bed because of the epidural and the magnesium sulfate drip I was on to prevent contractions. After those were discontinued, I was moved to the high-risk antepartum unit to be monitored. Then, before I knew it, it was time to be discharged.

I was extremely nervous to leave the hospital. There was a lot of comfort in my baby being monitored by the doctors and nurses at the hospital. It was comforting to hear the soothing rhythm of her heart beat; it reassured me she was doing OK. I was discharged at 25 weeks 2 days, would have to remain on modified bed rest for the remainder of the pregnancy and stay within a tight radius of the hospital at all times.

The following weeks we held our breath and prayed for our baby girl. The weeks were filled with frequent ultrasounds, doctor’s appointments, monitoring of the baby, blood work, repeat MRI and even a hospitalization at 32 weeks 2 days due to premature contractions and a degenerating fibroid.

But on Sundays, both my husband and I were able let out a small sigh of relief. We knew going in that having the fetal surgery increased the chances of preterm labor and our baby coming early, but on Sundays, we celebrated. Our baby was another week older, she was still in there, and we were just that much closer to getting her to full term.

At 39 weeks, on Sunday, Dec. 11, 2016 at 1:49 p.m., my daughter, Beatrix Evelyn, came into the world. After laboring to 8 cm, we were rushed back for an emergency C-section due to repeated fetal heart decelerations. The nurses ran, pushing my bed down the hall to the OR which filled with people who rushed in to prep me for surgery and get my baby out. My husband barely made it back to the OR before she was delivered; and that first cry when she was delivered was the sweetest sound I had ever heard. I was so relieved and thankful.

Although it may have been just another day at the office for the surgeons, having that surgery was the most important thing I have ever done. It was the first decision I made as a mother, and probably the most important decision I would ever make. It was the only time I would be able to do anything to help my daughter. Any other surgeries or procedures she would need to go through in the future, I wouldn’t be able to endure for her. She would have to go through that, and I would only be able to hold her hand, attempt to comfort her and support her.

In a very small way, my daughter and I helped to contribute to advancing medicine. The surgery we had was a fetoscopic repair for myelomeningocele, it’s still considered experimental. From our surgery, the team of surgeons learned ways to improve their technique, and will continue to improve their technique and outcomes on each subsequent surgery. At the time of my surgery, Texas Children’s Fetal Center was the only place in the country that performed this surgery. When we started the evaluation process, they had only performed 19 fetoscopic repairs.

My daughter Beatrix (Trixie as we call her for short) is doing well. She is 6 months old now and thriving. She is curious, busy, has great comedic timing (at least that’s what my husband and I think) and is quite the wiggle worm. She has great movement in her legs, so much so that the doctors always comment on it. Most importantly, she’s a happy baby.

She loves to be read to. She loves music, and being sung to; some of her favorites are: “Itsy Bitsy Spider,” “You are my Sunshine,” and hearing Daddy rap along to the Hamilton soundtrack. She loves to go for walks or outings in her stroller and look around at everything around her, taking the world in. She’s fascinated by the ceiling fans and lights in our house. She’s constantly smiling and laughing, sometimes for no apparent reason, but every time she does it, my heart melts. The decision to have that surgery, I know, significantly improved my daughter’s quality of life.

My daughter is a miracle in so many ways. First and foremost, she made me a mother.  Something I had prayed so long for and wasn’t sure if it would ever happen. My journey to becoming a mother was filled with more bumps in the road than I ever could have imagined. It wasn’t easy. It was filled with years of disappointment and heartache. And then we found out we were pregnant, after moving on and working to build our family through adoption. Then we were told she had spina bifida, and after she was diagnosed, there were so many emotions. I was filled with anger, confusion, sadness, uncertainty, fear. Mostly, I was afraid. Afraid because I didn’t know what was ahead for my baby. Initially, all I could think about was her condition, but that’s no longer the case.

Trixie has been through a lot already in her short life. She had her first surgery when she was still inside me, at 24 weeks 3 days, when she was estimated to weigh 1 pound 7 ounces at the time. She had to have another surgery the day after she was born due to the layers of the skin around the repair of her lesion becoming weakened. She had to stay in the NICU for nine days before coming home. After nine days of being home, she was readmitted to the hospital for a couple days due to the surgical incision site reopening. At 5 months she had to be admitted to Texas Children’s to have an ETV/CPC procedure for her hydrocephalus. A few weeks later she returned to Texas Children’s to have a shunt placed due to the ETV failing. My daughter has been through a lot. And I’m so proud of her for how strong she is, and how much she’s had to overcome.

Aug. 31, 2016 was the scariest day of my life, but one I’m going to celebrate. For it was a day we (and by we, I mean myself, my husband and our two dogs who also made the move to Houston) faced this head on. My husband and I have decided to call Aug. 31 “Stitch Day” and to celebrate it with Trixie every year. We want to celebrate her strength and what she went through. We hope someday she wears her scar as a badge of honor, the way I wear mine.

A little after we were told Trixie had spina bifida, somebody said to me, “I will pray you will be guided into all the right hands along this journey and pray your baby gets the best care possible.” That prayer was absolutely answered. I can’t imagine going through this experience with anyone other than the people at Texas Children’s. There truly are no words to express what those people mean to me and how thankful I am for everything they did for me and my baby. I am thankful for their tremendous skill and knowledge to be able to perform a surgery, one very few people in the country, or world for that matter, are able to perform; one that will significantly improve the quality of life for my daughter. But I’m also thankful for who they are as people and who they were for me at the scariest, most stressful time of my life. One might say, well, that’s their job. And it is. But I can honestly say, being a nurse myself and having worked alongside many doctors and nurses throughout my career, this level of care is extremely rare. I am extremely fortunate with the experiences I had with the team of physicians, nurses and other medical and hospital staff. The kindness, encouragement, comfort and support they gave me will never be forgotten.

My daughter has spina bifida. She’ll always have spina bifida. The surgery didn’t fix that. She may or may not have some challenges associated with her condition, and it may take years for us to know what challenges she has. But I will be forever grateful we were able to have that surgery and give her the best possible outcome. I am still scared for what she may potentially be facing in the future, but not like I was before. She’s my daughter; we’ll get through it. She’s who I spent my whole life waiting and praying for. And boy, was she worth it.