TTTS: A beautiful outcome of our hopeless case | Pavilion for Women 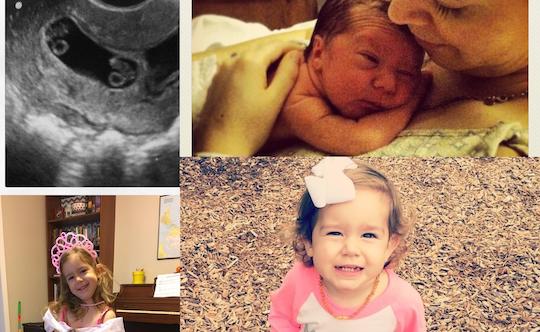 We first heard about Texas Children’s Pavilion for Women when our doctors called them for advice on our case. Our identical twin girls were 20 weeks along and had finally been diagnosed with twin-to-twin transfusion syndrome (TTTS). Our girls shared a placenta. One twin was getting all of the blood flow from my placenta, and the other twin was getting hardly anything.

I say finally diagnosed because when it was finally diagnosed they were already at a stage 2-3. This meant both of our girls were in extremely serious danger. In fact, our doctors who presented our case to Texas Children’s, said, “This is a hopeless case.” And the wonderful doctor at Texas Children’s replied, “Send them to us; we deal in hopeless cases.” What beautiful words for a family in need!

This hopeless case would arrive at 11 p.m. after an emergency flight from Atlanta to Houston, a hot mess of contractions and emotions, two worried and desperate parents and our 2-year-old son in tow. But we were immediately met by our fetal specialist at Texas Children’s and learned all about laser ablation surgery. The surgery would essentially divide the cells between our daughters hopefully giving them both a chance at survival.

The surgery was scheduled for a few hours later. To my husband, Brett, and I, it could not come soon enough! When looking at an ultrasound of our girls, it was clear that our “donor” twin (Tabitha) was essentially in survival mode. Her organs had already started to shut down, and she could barely move. She was stuck up in a corner of my uterus with very little fluid surrounding her. Her sister, the “recipient” twin (Priscilla), was practically swimming in an overabundance of fluid - fluid that was enlarging her heart and endangering her in ways we had not realized before.

The surgery went without incident, and we were beyond relieved to hear both girls had survived the procedure. We were then given several more markers they would need pass: the first 24 hours, the first 48 hours and then one week. These were all crucial periods of time for their recovery. Thankfully the girls made it through the first 24 hours. But as Brett and I leaned in to look at that first ultrasound after surgery, we noticed right away that our little swimmer, Priscilla, was now barely moving at all. “She’s just resting. She’s been through a lot.” These were the words to which we clung as we waited and prayed. It was only a few hours later that our sweet doctor, who had looked over the ultrasound images at his home, came in—on his day off—to just “check again.” I’ll never know for sure, but I suspect he knew what he would find when he ran that ultrasound wand over my stomach. I think he knew, and he was willing to come just so we would know sooner. Our baby girl, Priscilla, was gone.

At the one week mark, the intensity of our loss was only magnified when we were told that while Tabitha had survived, she was still struggling for her life. The fetal cardiologist explained her heart had been through such severe trauma that she had acquired a heart defect. We were told that if she made it through the pregnancy, she would more than likely still need several heart surgeries in order to survive. We were shocked and shaken, but it didn’t take long for us to decide that the best chance for Tabitha was for us to stay close to Texas Children’s for the remainder of our pregnancy journey. We wanted the very best team to be with us through the fight for Tabitha’s life.

And indeed it was a fight! We had a month-long stay to ward off contractions starting at 24 weeks. There was a night spent in labor and delivery waiting for a C-section when Tabitha’s heart wouldn’t stop decelerating at 28 weeks. Only to wake up the next day still pregnant and rejoicing. Finally, we moved into the Ronald McDonald House down the street from the hospital, and witnessed what so many families with sick children have experienced there. With its many ups and downs, this miraculous journey finally brought us to 38 weeks – you read that right! FULL TERM! truly a miracle on all accounts – when my water broke, and Tabitha was delivered. She was immediately whisked across the labor and delivery room to be checked over by a team of doctors because of her high-risk status, only to be brought back a few minutes later to rest on my chest. She was perfect in every way. Our journey with TTTS was a long one. In it we shed many tears, prayed many prayers, learned a lot about ourselves, our friends and our family who walked beside us through it all. When we look at Tabitha, now 4-and-a-half years old, practicing writing her name while she tells us about her friends in preschool, we are blown away by the miracle of her life. She is the beautiful outcome of our hopeless case.

Abigail Wilson lives in San Antonio, Texas, with her husband and 3 children. She is a writer, public speaker, and professional coffee drinker. In her spare time she enjoys over indulging on Instagram stories. Her book “The Day Between: A Memoir of Miracles” tells of all the glorious details of her journey with TTTS: What she learned about herself and God through the loss of a daughter and the miraculous birth of another.