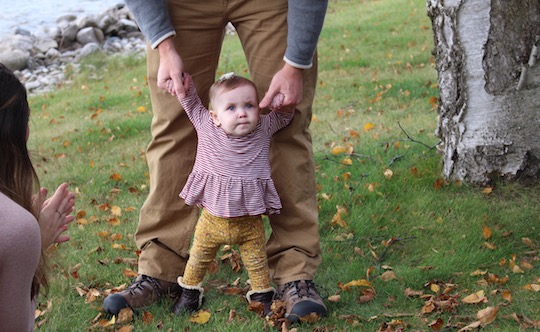 Building our first house, my husband changed jobs, I began my Master’s program and we were trying to have our first baby. We knew we were taking on a lot; but never imagined what would soon unfold.On Father’s Day 2016, my husband Mike and I learned we were expecting! Come early October we had our anatomy ultrasound and left beaming with photos of a beloved baby girl. The following afternoon, I had missed a call and voicemail concerning our ultrasound.

Frantic, I tried returning the call, but the office was closed. In the morning, I heard from our doctor; I began writing notes so I could tell Mike. None of it was sticking because I was completely in shock of a “significant finding.” I wrote, “Congenital Diaphragmatic Hernia, CDH. A defect of the diaphragm. Belly organs up, causing the heart and lungs to shift. Lung development is the biggest concern. Some places in the country perform in-utero surgery for severe cases?! Referral to high-risk ultrasound for confirmation. Don’t Google it.”

After the long weekend, we had an ultrasound at a maternal-fetal medicine clinic in Grand Rapids, Mich.; the diagnosis was confirmed. Right-sided CDH, the rarer and more severe side. Our baby’s liver was in her chest and was compressing her lungs and heart, which would hinder lung development. We learned more about the condition, and what to expect for the rest of pregnancy and after birth. It was all a blur; we were devastated. I canceled baby shower plans and unsubscribed our baby development apps, normalcy was no longer in the picture. We continued with close monitoring; we had ups and downs, but overall we stayed positive. We prayed, and we believed in the strength of God and our baby girl.

By early November, we had done our research and decided to get a second opinion. At nearly 29 weeks pregnant, our mini-marathon of appointments began with a fetal MRI, and our last meeting was a pediatric surgery consultation. The surgeon we met came in and sat across from me and Mike in a small conference room. She told us our baby’s total lung volume was even less than expected, at only 18 percent. There wasn’t much lung tissue on the right side, if any. She told us that it ultimately wasn’t hopeless, but it was very severe. If our girl did pull through, it would be a long hard road in the neonatal intensive care unit (NICU). The conversation was short, and it really felt like an “expect the worst” type of consult. For the first time we felt defeated. Believe it or not, the next day, a Friday, was my 25th birthday and the day we planned to move into our new house.

However, it didn’t feel like the celebration those occasions should be. We couldn’t even open the door of the room we planned to be the nursery. Around noon, my phone rang and the surgeon we’d met with was on the other end, “I’ve been thinking about your case all day and have talked with colleagues around the country. There is an experimental trial in Houston that I believe could help your baby.” Fetal intervention surgery; four weeks with a balloon placed in our daughter’s trachea that would plug amniotic fluid in the lungs with the goal of forcing more lung growth. I gave permission for our case to be sent, reviewed and hopefully approved. Urgent was an understatement, as the balloon needed to be placed before I was 30 weeks. Our families were all coming up that day to help with the move and spend time with us. Together, we discussed the potential of the surgery in Houston.

Mike and I felt we had to try; we had to know we did everything in our power to give our girl her best chance. Everyone agreed. The following Tuesday, I received another phone call, this one from Texas Children’s Pavilion for Women, in Houston. They elaborated on the procedure and emphasized the criteria of the balloon going in before 30 weeks. This meant we needed to be in Houston the next morning for 7:30 a.m. appointments. I prayed with my team of teachers as they sent me out the door promising to take care of my kindergarten class. Mike booked flights, and I called our parents. We dumped our suitcases from moving in, and we packed for Houston. Planning on at least a month stay while the balloon was in place. We hoped to be able to return to Michigan for the birth. That night, after only four days of living in our brand new house, we flew to Houston. For the next two days we met our team and were evaluated. We studied their faces, which Miss Florence, our PA assured us was a new family. During our meeting, the OB/GYN-in-chief of the Pavilion for Women, Dr. Belfort, received a call from the head of the FDA giving final approval on our “off-protocol, compassionate care” case. The knowledge and experience of our nine-doctor team from all over the world was incredible. We were certainly overwhelmed, but felt we were in the right place.

Our hope was back. We would return at 5:30 a.m. on Friday for the balloon to be placed, 2 days before 30 weeks. Our surgeon from the University of Michigan traveled to observe the fetal surgery. This really meant a lot to us. The procedure went smoothly and the balloon was placed successfully. It was the first “win” we felt we’d had in a long time. Mike found an apartment that we moved into for the next month. I was on modified bed rest. We would only leave for appointments twice a week, and for the occasional meal out. We couldn’t be more than 5 miles from the hospital in case we needed to get there for an emergency.

For the next four weeks of appointments, all the doctors were very excited and encouraged with the results we were seeing from the balloon placement. By the fourth week, we had another MRI with the balloon in place. Dr. Olutoye stayed late to share the results. The lung volume went from 18 to 27 percent. The left lung nearly doubled - what an amazing increase! Still no guarantees of survival, but the outlook was much better. No matter the outcome, we felt peace in knowing that coming to Texas helped our girl. Around the same time, my amniotic fluid was approaching double what a red-flag level is. I was hospitalized for the next nine days. During the stay, the decision was made to drain some fluid. However, contractions continued and a few days later the doctors decided it was time to remove the balloon, the fourth puncture to my uterus. Because the pregnancy was now so fragile, we decided we needed to stay in Texas, as getting back to Michigan would be too risky. We went back to our apartment for the next two weeks. One night, I thought it might be time so we decided to head to the hospital. In the elevator on the way to the parking garage, my water broke.

We knew it was time! We were anxious. We were excited to meet our girl, but nervous for what was ahead. It was time for her to be out on her own, and no one knew how she would do. We called our parents and rushed to the hospital. They all traveled down that day. After 31 hours in labor and a failed epidural, Jordan Elizabeth was born via C-section on Jan. 25. She was 36 weeks and 3 days gestation. We were not expecting to hear a cry knowing her lungs would severely struggle, but she surprised us! We heard a little peep out of her as she was immediately passed to the portable NICU team to get her intubated. Mike watched and kept me updated on the operating table. She was well enough to see me for about 20 seconds. I kissed her temple and studied her face from her eyebrows to chin. The neonatal team transported her to the Level 4 NICU as she needed even more support. Mike went with them, and I went to recovery. Somehow, Mike juggled Jordan’s schedule in the NICU, mine in the Pavilion and kept our families updated and coordinated. He is incredible.

This entire journey in Houston, Mike wanted me to only focus on being pregnant and what Jordan needed; he took care of everything else. This included keeping two lives going on opposite ends of the country, working his own job, communication with friends and family, insurance fiascos and making sure I didn’t take too much on in any capacity.