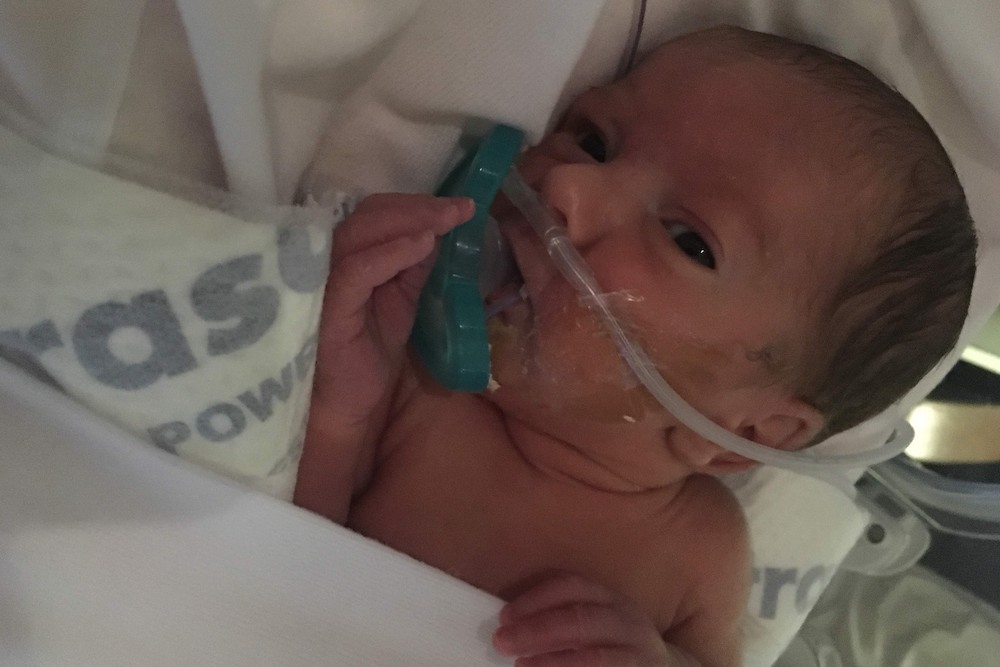 I was nervous. I ran through a list of questions to ask the doctor as my husband, Sam, and I waited for her to come in and review our 20-week anatomy scan with us. After the scan, we would head upstairs for our monthly prenatal visit with the midwives from the Women’s Specialists of Houston. When the doctor arrived, she greeted us and started the conversation by telling us some things every parent wants to hear.

“Four chambers of the heart … organs are developing at an appropriate gestational rate … the placenta isn’t covering the cervix.”

“The only thing concerning me,” she started. My chest tightened. The doctor went on to tell us our baby, Amos, had a sacrococcygeal teratoma (SCT), an unusual tumor located at the base of the tailbone. My care would be transferred to maternal-fetal specialists so the pregnancy could be closely monitored, and Amos would require surgery after birth to remove the tumor.

Sam and I somehow made it home that evening and slept. We both took off work the next day to process the diagnosis, and a day filled with diagnostic testing and consultations was scheduled for the following week.

We made it through the week, and then, on Valentine’s Day, we spent the holiday learning about the teratoma. After a targeted ultrasound, MRI and fetal echocardiogram, we found out Amos had a type II teratoma, which was primarily cystic and external. It measured approximately 6 centimeters by 6 centimeters by 4 centimeters. Due to the size of the teratoma at 20 weeks gestation, we were told open fetal surgery might be necessary if complications arose before Amos could survive outside of the womb. Otherwise, the prognosis of pediatric surgery after birth was hopeful.

The goal of my pregnancy was clear: to carry Amos for as long as possible and deliver via planned C-section no later than 37 weeks gestation. My pregnancy was managed on a weekly basis by the maternal-fetal medicine team from Baylor OB/GYN at Texas Children’s Pavilion for Women. Since fetal surgery was a possibility, four fetal interventionists oversaw our primary care: Dr. Jimmy Espinoza, Dr. Ahmed Nassr, Dr. Alireza Shamshiraz and Dr. Magdalena Sanz Cortes. We would check in on Amos every three or four days. One of the primary complications of a SCT is fetal hydrops, an accumulation of excess fluid, which can quickly lead to heart failure if not caught early. Our bi-weekly ultrasounds meticulously monitored tumor growth, key blood flow patterns in Amos’s heart, brain and umbilical cord, and my amniotic fluid level. Frequent fetal echocardiograms accompanied the ultrasounds to further ensure no signs of hydrops were developing.

As Sam and I grew to accept the diagnosis and new high-risk status, we looked forward to seeing Amos at each appointment. He was always very active during the ultrasounds, which delighted us – even the technicians sometimes had a difficult time obtaining all the necessary measurements! Amos was growing safely alongside the tumor, which was also growing. During the first few ultrasounds I would cry when the teratoma came across the screen. But after a while, I only saw Amos. Week after week, he remained healthy and strong. Every day increased viability for early delivery. The weeks leading up to when early delivery would trump fetal intervention were harrowing. Although we rotated through fetal interventionists, each remained briefed on our case should fetal surgery become necessary. We yearned for black-and-white answers, but nobody could tell us what was going to happen with certainty.

In addition to the diagnostic imaging appointments, I had weekly obstetric appointments starting at 24 weeks gestation. For a low-risk pregnancy, women typically don’t begin seeing their provider this often until after 36 weeks gestation. I remember feeling these visits were unnecessary at first, since I was already being seen at least twice a week for ultrasounds. But as a nurse coordinator stated, we still had to pursue the “normal pregnancy care” that needed to happen. This included prenatal labs, weight checks, urinalyses, vitals, etc. Routine prenatal care felt so incongruent to the serious, intervention-heavy care Amos and I were receiving because of the teratoma, but the visits allowed us to foster relationships with our doctors and provided important focus on me as an individual.

The day after reaching 28 weeks gestation, I was admitted to the hospital for increased amniotic fluid. The fluid was increasing as Amos and the teratoma grew, but the level had risen to a point where preterm labor was a concern. Dr. Nassr performed an amnioreduction, bringing the fluid down to an acceptable level. It bought us precious time. Two weeks later, I was back for another amnioreduction. I thought it’d be wonderful if the procedure bought us another two weeks. However, a week later, I was back with preterm contractions. And this time, the amnioreduction didn’t stop the contractions. Instead of discharging me and risking preterm labor, viability was high enough that Dr. Nassr recommended I deliver under the planned situation he wanted.

Amos Jude Means was born the next morning at 9:30 a.m. via C-section at 31 weeks and three days. He cried when he came out, and the sound brought tears to my eyes. I was able to hold him briefly before he and Sam made their journey to the NICU. We chose long before the diagnosis to not know the sex of our baby, so the surprise of having a son sustained me while Drs. Nassr and Sanz Cortes finished the surgery and I went into recovery.

I wasn’t able to go to the NICU until later that day. When I held Amos in the delivery room earlier he was wrapped in a blanket, but now he was completely uncovered in his incubator. Seeing the tumor wasn’t as difficult as I had anticipated. While I hated its presence and connection to my son, I was even more in awe of Amos. He survived with that horrible mass on him for almost seven months. We weren’t certain of Amos’s true birth weight since the tumor wasn’t meant to stay, but right away I began telling people, “He may be tiny, but he’s mighty!”

Amos underwent surgery when he was 5 days old. Dr. Oluyinka Olutoye performed the resection and successfully removed the teratoma. Its final measurements were approximately 10.3 centimeters by 14.8 centimeters by 13.1 centimeters. We later found out the tumor weighed approximately 2 pounds, making Amos about 4 pounds at birth. The next three weeks were spent recovering in the level IV NICU. In that time, Amos began receiving breast milk and gaining weight, battled and beat a PICC line infection, learned to regulate his body temperature and slowly went from needing a CPAP machine to a nasal cannula to breathing room air.

We visited him every day; we would sing to him, stand by his bed and place our hands on his chest and head for comfort. We would talk to him and eventually hold and feed him. During this time, pathology from the teratoma came back and revealed a less than 1 percent composition of immature cells, meaning the tumor wasn’t completely benign. Thankfully, imaging confirmed nothing had metastasized anywhere. Amos is being followed by oncology to ensure nothing comes of the immature cells. His lab results and imaging continue to show no sign of returning disease!

The day before his one-month birthday, Amos graduated to the level II NICU. We spent three weeks in the level II NICU, and while Amos continued to do well and progress, time dragged on. It seemed to me as if we’d never go home. I struggled with wanting my baby home with us and knowing he wasn’t ready yet. Amos was eating and gaining weight but still had apnea and bradycardia episodes, or “A and B events,” which cause newborn babies to stop breathing momentarily as their heart rate drops. The nurses and doctors told us this was normal for a preemie and that Amos would eventually grow out of it. Our criterion for discharge was to go 10 days without “A/Bs.”

Finally, Amos stopped having episodes and discharge plans were made! Amos came home on June 16, the day before Father’s Day, weighing 5 pounds and 12 ounces. Our family is thankful for the care Texas Children’s Hospital provided to both of us and continues to provide Amos. We know that without them, Amos wouldn’t be the healthy, happy boy he is today. 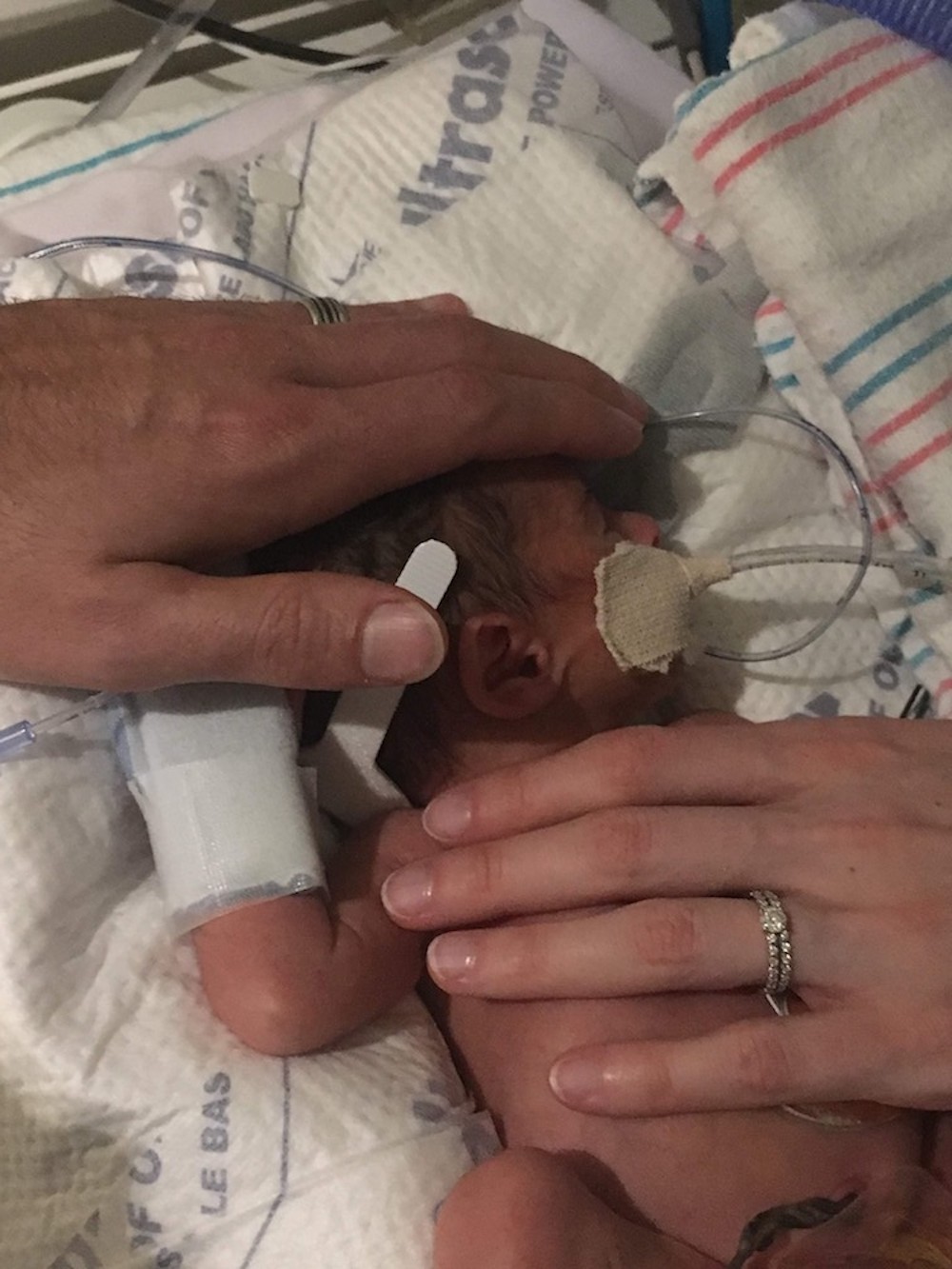 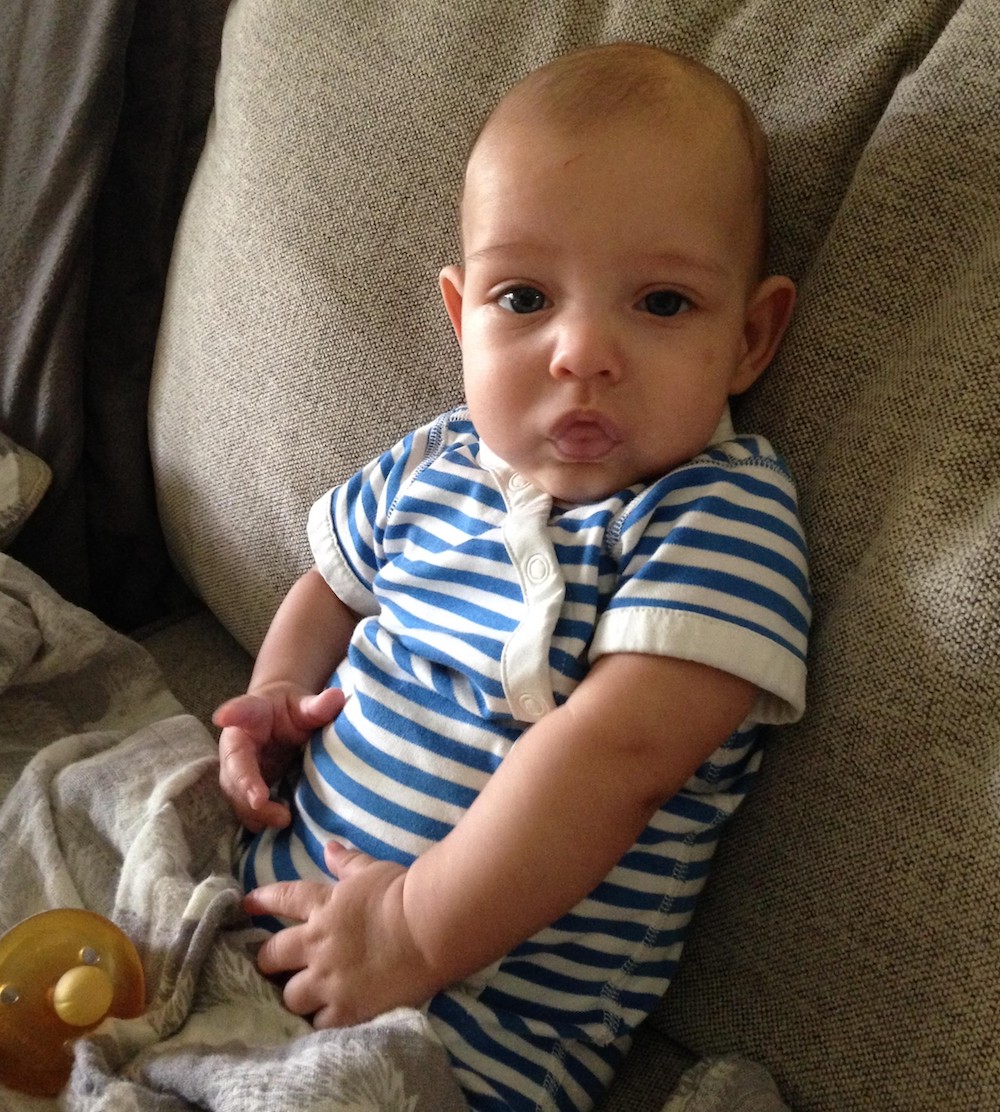 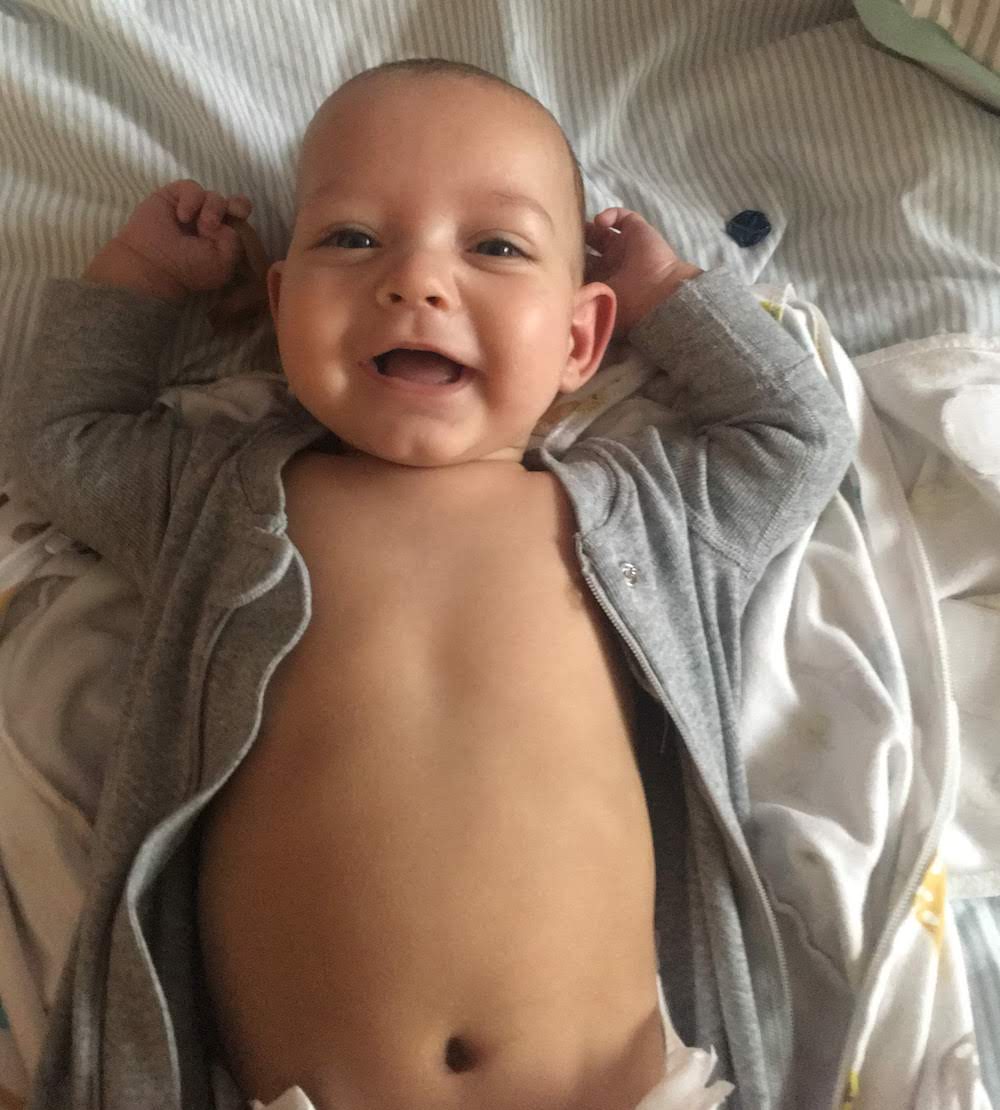 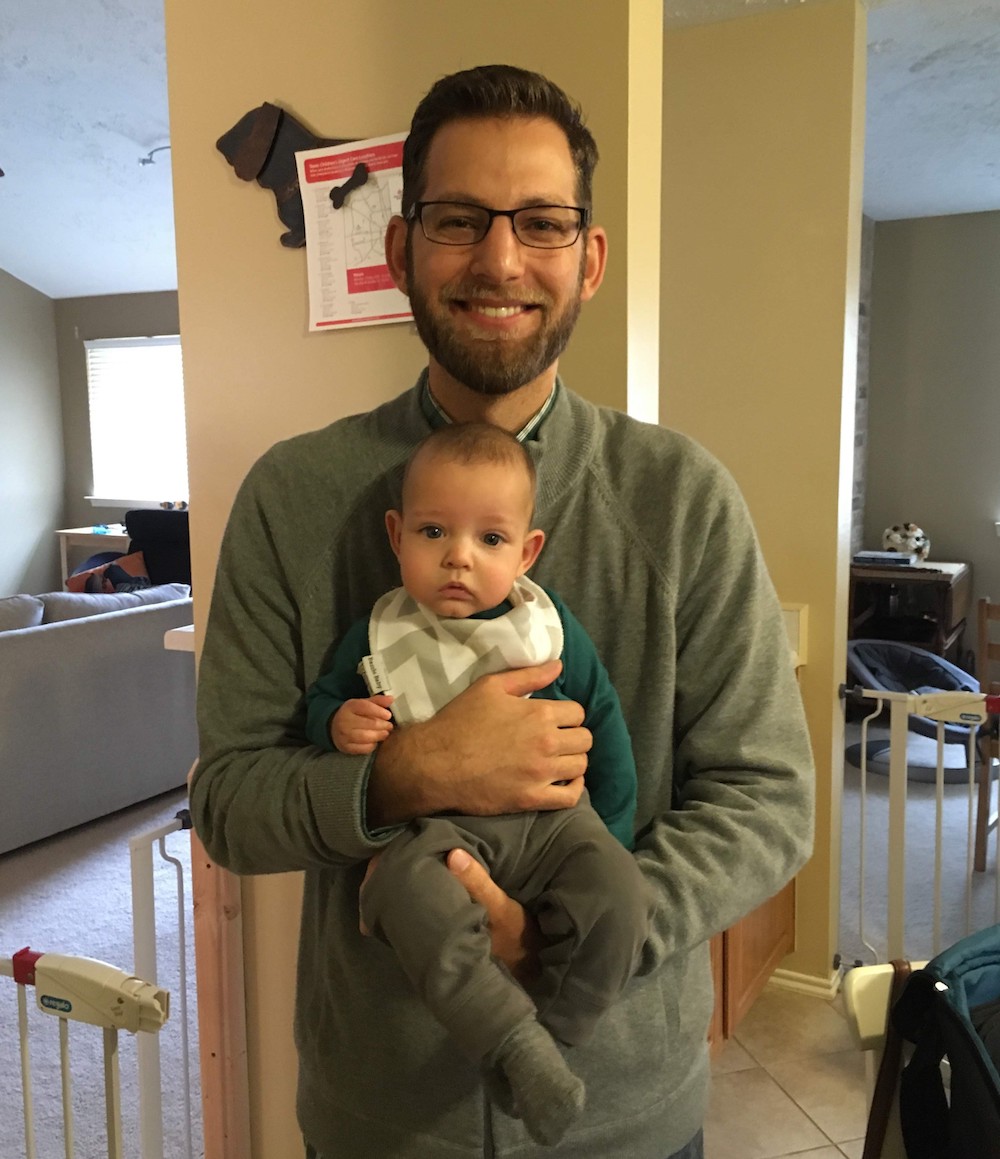