David's story: Our son's remarkable progress in the NICU after recovering from esophageal atresia surgery | Pavilion for Women

David's story: Our son's remarkable progress in the NICU after recovering from esophageal atresia surgery 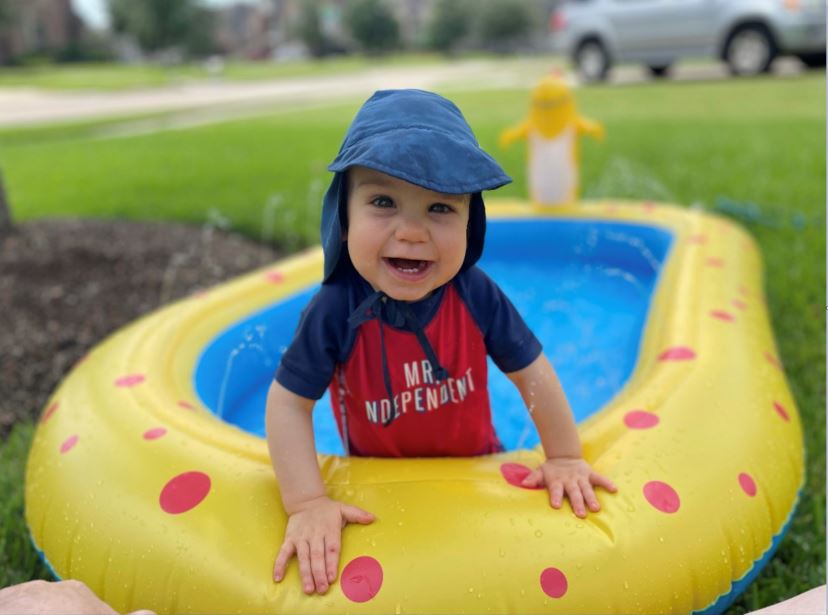 David Fuselier is a happy 1-year-old with a healthy appetite and the ability to light up a room. But this wasn’t always the case. About 18 months ago – before he was born – all eyes were on little David out of deep concern.

“When I was 23-weeks pregnant, I went to my OB/GYN for a routine ultrasound, but my husband, Arlen, stayed in the car because of COVID-19 visitor restrictions,” Stacey Fuselier said. “That day, I had a feeling something might be wrong with our baby. During the previous appointment, my doctors had a suspicion that they were able to confirm this time. So, when I went to my OB/GYN for my son’s ultrasound, I found out our baby was diagnosed with esophageal atresia Type-A.”

Esophageal atresia Type-A is a rare birth defect where a baby’s esophagus and stomach are not connected, which can lead to swallowing and breathing difficulties. In David’s case, opposite ends of his esophagus did not meet causing a five and a half centimeter gap – which is considered a long gap. Since amniotic fluid is normally swallowed by the baby in utero, babies with esophageal atresia can’t swallow, which can cause a build-up of fluid in the amniotic sac. If too much amniotic fluid builds up in the uterus over time, there is a possibility the baby could be delivered prematurely.

After receiving this unexpected diagnosis, Stacey’s OB-GYN referred her to the maternal fetal medicine team at Texas Children’s Pavilion for Women®. For the next 11 weeks, Stacey and her baby were closely monitored with regular ultrasounds and tests to assess David’s fetal development and the risk of premature delivery. To keep David from being born too prematurely, Stacey had two amniotic reductions at 29 and 32 weeks, respectively. When she was 34 weeks pregnant, Stacey and Arlen welcomed their newborn son, David, into the world via Cesarean section on July 11, 2020.

“When David was born, he was healthy despite his esophageal issue,” Stacey said. “After his birth, the biggest concern was him choking on his secretions since he couldn’t swallow. As soon as he was born, he had a replogle tube inserted in his throat to suction his secretions so it wouldn’t overflow into his trachea and cause aspiration. Since he had esophageal atresia Type A, I knew he would be in the NICU for quite some time, but I had no clue we were going to be in the NICU for seven months. Arlen and I took turns visiting David due to the hospital’s visitor limitations during COVID, but we had a great family support system in place, incredible nurses and an awesome care team who helped us on this journey.”

In Nov. 2020 – once David reached a certain weight for surgery – he underwent the first of several procedures, referred to as the Foker process, to restore connection from his esophagus to his stomach. Since David had long-gap esophageal atresia, his surgical team at Texas Children’s had to stretch his esophagus. During the procedure, several sutures were placed on the upper and lower ends of David’s esophagus. Tension was applied to the sutures little by little, allowing each end of the esophagus to grow towards each other over time. David was sedated for one month while his esophagus was being stretched. Once his esophagus reached a desired length, his surgeons completed the connection surgery.

“Our son had to be fully sedated to ensure the success of the stretching procedures because any extensive motion could pull out the sutures,” Stacey said. “It was hard seeing David, just 4-months old, in the intensive care unit on a ventilator. He wasn’t a sick baby – he was just broken. He had a broken esophagus. As hard as it was seeing our baby under sedation for a whole month, I knew it was necessary to ensure the success of this procedure, and I knew our son was receiving the best care possible at Texas Children’s. One month later, David’s esophagus grew long enough for surgeons to complete the Foker procedure. On Dec 21, 2020, David had his surgery to connect his esophagus to his stomach.”

From birth, through surgical corrections and recovery, the Fuselier family spent a total of seven months in the Neonatal Intensive Care Unit (NICU). Throughout their journey, Stacey is thankful for the incredible support team she and David had in the NICU. While the COVID-19 pandemic presented many challenges – like visitor limitations – the Fuselier family developed a second family inside of Texas Children’s. David’s NICU nurses, Lolita Fernandez and Lauren Stombaugh, became part of their extended family, which helped make the extended hospital stay in the NICU more manageable.

“David has two grandmas who love him, adore him and are so happy to see him now that he’s home,” she said. “But I always joked that David needed a NICU grandma. And well, we got that in nurse Lolita Fernandez. She was David’s NICU grandma and my NICU mom. I didn’t have my mom with me. I didn’t have anyone there. My other nurse, Lauren, became a friend I could talk to about what I was feeling and going through. There’s a whole group of these NICU nurses who were amazing. While they are taking care of your child, you don’t realize in the moment that they are taking care of you, too.  During this pandemic, my nurses became my family and my saving grace. I can’t say enough good things about them.”

Today, David is at home and doing very well. He continues to undergo physical and occupational therapies at home and receives follow-up care from Drs. Adam Vogel and Douglas Fishman through Texas Children’s Aerodigestive Program which provides multidisciplinary care for children with complex airway and digestive tract disorders. David still eats with the help of a feeding tube once each day, but mostly eats by mouth. He is a happy and playful baby; whose progress his parents consider a miracle. David recently celebrated a milestone – his first birthday on July 11.

“Our journey was a difficult one, but I never doubted we’d found the right care team,” Stacey said. “Even on the tough days I was thankful that our baby could get better in a place as exceptional as Texas Children’s Newborn Center.”

David will be honored this October during the 23rd annual RBC Bad Pants Open. This event brings Houston’s worst dressed and most generous golfers together to help save the lives of Texas Children’s tiniest patients. This event funds nurse training and education, hands-on bereavement care programs and ensures each family’s urgent needs are met – from covering parking costs to providing face masks for parents of newborns to take home with them when they are discharged.