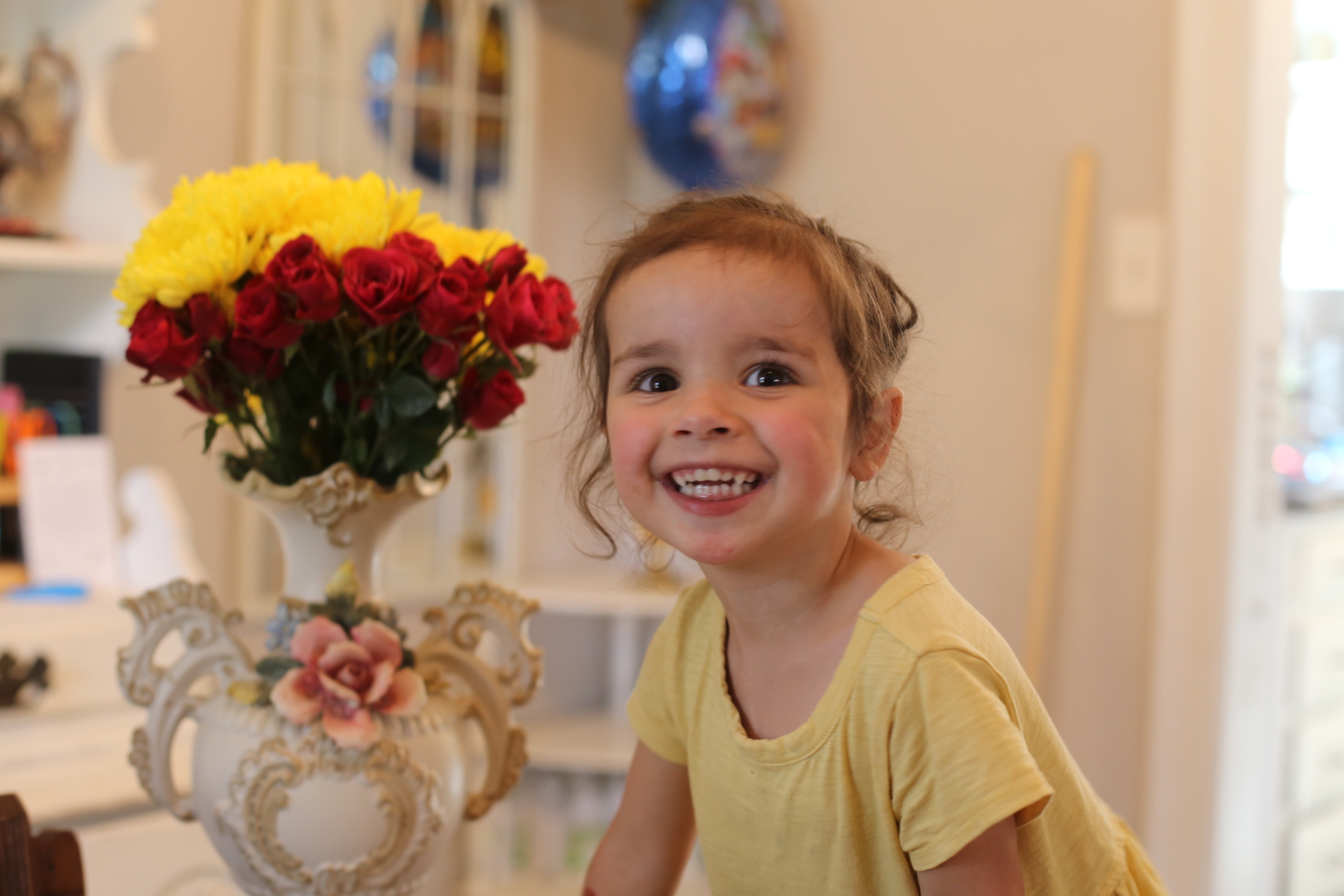 Celebrating a child’s birthday is a very special moment, especially for parents. It signifies another year of life, and each birthday is special in its own way. Last month, when Geoffrey and Rachel Finn’s daughter, Ivy, turned three, it reminded them of how much their daughter has grown and how far she has come.

“We always look forward to Ivy’s birthday on Sept. 14,” Rachel said. “She is our little firecracker. She is spunky, assertive and incredibly loving. She likes to play with her older brother, Bear, and she loves animals, especially farm animals. To celebrate her third birthday, we took her to the farm where she enjoyed riding ponies and petting animals. Every day with Ivy is a blessing. Early in my pregnancy, we were told it was unlikely Ivy would survive after birth. As years go by, Ivy has clearly beaten the odds.”

When Rachel was 20-weeks pregnant, her OB/GYN in Jacksonville, FL, spotted something unusual on Ivy’s anatomy scan and immediately referred her to a cardiologist who performed a fetal echocardiogram. The results confirmed their suspicion: Ivy had hypoplastic left heart syndrome (HLHS), a congenital heart defect in which the left side of the heart does not form completely and cannot pump oxygen-rich blood to the body. Two weeks later, the Finns received another diagnosis. Ivy had an intact atrial septum, where the heart’s upper chambers failed to develop properly causing blood to back up and damage her lungs.

“Both diagnoses worsened our daughter’s case,” Rachel said. “Our cardiologist referred us to a children’s hospital that performs traditional fetal interventions to treat HLHS where a catheter needle is used to poke a hole through the atrial septum to keep blood circulating throughout the body. We were trying to remain hopeful, but soon learned we were denied this procedure due to the severity of Ivy’s condition. The surgery would be too risky because Ivy’s septal wall was too thick, her left atrium was too small and the risk of the needle going through the left atrium was too high. When we received the news that our daughter’s case was denied, we were sent home with hospice papers. That’s when my husband and I hit our lowest point, thinking that we would have to let Ivy go and there was nothing that modern medicine could do about it. We went from being super positive to everything spiraling downward quickly.”

Rachel began doing her own research to see if there was still hope for the couple’s daughter. During her online search, she came across Texas Children’s Fetal Center and learned about fetal interventions to treat babies with different types of congenital heart conditions. Realizing that Texas Children’s was No. 1 in the nation for cardiology and cardiovascular surgery, Rachel quickly reached out to Ivy’s cardiologist in Jacksonville who transferred Ivy’s medical records to Texas Children’s so they could review her case.

“A week later, we received a call from Texas Children’s,” Geoffrey said. “The fetal team informed us that it was too risky to perform the traditional fetal intervention due to the severity of Ivy’s condition. However, they offered us an experimental procedure that had never been performed in the womb that might give our daughter a surviving chance. We knew that there was no way of knowing how long it would keep Ivy alive, but with no other options available, we agreed to proceed with this surgery. Three days later, we arrived at Texas Children’s Fetal Center. We went through several ultrasounds and MRIs. The doctors confirmed Ivy’s lung damage was so severe at the time, but we moved forward with the fetal surgery.”

On July 6, 2018, Rachel, now 30 weeks pregnant, and baby Ivy, were the first to undergo an experimental fetal intervention for severe hypoplastic left heart syndrome. This revolutionary procedure, performed by surgeons and physicians at Texas Children’s Fetal Center and Texas Children’s Heart Center, used a laser to burn a tiny hole in Ivy’s septum and then insert a stent to improve blood circulation to the rest of her body. Experts agreed the stent was necessary to give Ivy a chance to survive until she was born.

“We were relieved the surgery was a success, but we knew we had a long road ahead,” Rachel said. “During my brief stay at the hospital, I met with Dr. Belfort, the OB/GYN in chief, and Dr. Heinle, to discuss Ivy’s future with Texas Children’s. We hadn’t decided if we were going to relocate to Houston, but we soon realized that we needed to be closer to a pediatric hospital that treats a high volume of patients with HLHS. When I was 36 weeks, we moved to Houston where Ivy could receive the care she needed.”

One month after relocating to Houston, the day finally arrived. Geoffrey and Rachel welcomed their beautiful daughter, Ivy, who was born at Texas Children’s Pavilion for Women on Sept. 14, 2018.

“It was pure joy when I first laid eyes on her,” Rachel said. “The nurses placed her on my chest as soon as she was born and she came out screaming. It was something we weren’t sure we’d ever hear. It was an amazing experience for our family. Our then 3-year-old son, Bear, was so happy to have a sister.”

Even before Ivy was born, Geoffrey and Rachel knew their daughter was a strong heart warrior. During her six-month stay in the cardiovascular intensive care unit (CVICU), Ivy had three open heart surgeries. She had the Norwood at 6 days old and the Glenn when she was nearly 5 months old, which are part of a series of surgeries that patients with HLHS go through during different stages of their treatment journey. At 2 months old, Ivy underwent reconstructive surgery to repair her underdeveloped pulmonary vein.

“Our daughter has exceeded expectations in every way,” the Finns said. “There are no words to describe how thankful we are to have her, because we really didn’t think we would. We are grateful to so many people who have been part of our journey from the beginning – from our cardiologist in Jacksonville who diagnosed Ivy to the wonderful care team that we met at the fetal and heart center at Texas Children’s. I can’t thank Dr. Heinle enough who was our daughter’s heart surgeon. Our fetal team and CVICU staff communicated so well with us, they answered any questions or concerns we had, and made us feel included in all aspects of our daughter’s care. I had great nurses who were helpful and accommodating. They helped me bond with my baby. All of the nurses encouraged me to hold her often, and I think that helped Ivy in her recovery. Everyone welcomed us with open arms and made us feel at home. Ivy’s odds were not good. In fact, they were terrible. Yet, here she is – a beautiful, happy and vivacious 3-year-old who loves pre-school!  We thank God often for what he has done and for being with us on our journey.”

The Finns, who have since moved back to Jacksonville, say their daughter is doing well. She’s graduated from her physical and occupational therapies, and despite being on a G-tube for supplemental feeds, she is progressing well with eating on her own. Her cardiologist in Jacksonville works closely with Ivy’s care team at the Heart Center at Texas Children’s. In the next year or two, the Finns will return to Texas Children’s for Ivy’s Fontan procedure, the third surgery in a series of procedures for patients with HLHS.

Click here to learn more about Texas Children’s Heart Center. Click here for more information on HLHS and the fetal interventions that are available to treat this condition and other congenital heart anomalies.