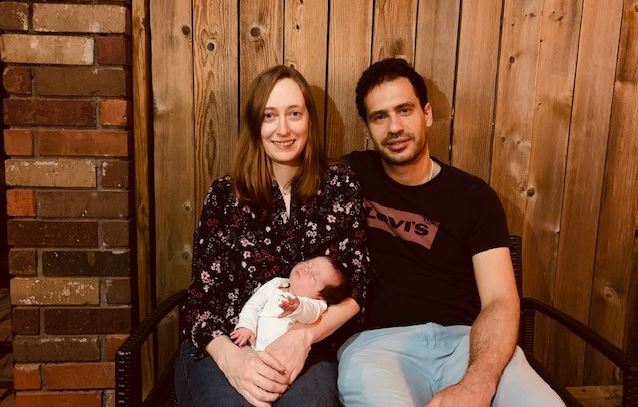 As a first-time, expectant mother, Lauren Bailey was excited about the thought of being called “mommy” one day. As each month passed, her baby was getting bigger and her pregnancy was progressing smoothly. But, things soon changed during her baby’s routine 20-week anatomy scan in Oct. 2020.

Lauren’s OB/GYN noticed an abnormal growth on her placenta. It was a chorioangioma, a benign, vascular tumor. Chorioangiomas occur in an estimated 1% of pregnancies. Small chorioangiomas typically cause no symptoms and complications. If the chorioangioma is large, measuring more than 4 cm., in some cases, it can pose serious risks to the pregnancy and the fetus, including fetal heart failure.

“Since my chorioangioma potentially could grow bigger during my pregnancy, my OB/GYN referred me to a maternal fetal medicine specialist who focuses on high-risk pregnancies,” Lauren said. “Two weeks later when I came in for my ultrasound, the chorioangioma looked slightly larger than it did at 20 weeks. My doctor monitored my baby’s heart to ensure normal blood circulation and checked for anemia and signs of fluid accumulation around her heart, lungs and abdomen. Everything appeared to be fine.”

At Lauren’s 24-week ultrasound appointment, her pregnancy got more complicated when she found out her daughter was showing early signs of heart failure. Her baby had an enlarged heart, swelling under the skin and fluid accumulation around her heart and abdomen. Realizing something had to be done right away, Lauren’s OB/GYN referred her to Texas Children’s Pavilion for Women® where she was admitted that same day. The next day, she met with her fetal intervention team at Texas Children’s Fetal Center®.

“While it was difficult coming to terms with this unexpected diagnosis, I knew my baby and I were at the right place to receive care,” Lauren said. “When my husband and I met with our fetal intervention team, they explained our treatment options for the chorioangioma since it was putting our baby in high cardiac output failure. The first option was laser ablation which is used in twin-to-twin transfusion syndrome, but it would be too risky because the tumor was very close to the umbilical cord. The other option was a fairly new treatment approach that would cut off the blood flow to the tumor on my placenta without surgically removing it. After assessing the risks and benefits with my fetal surgeons, we decided the second option would be the best approach since it was less risky and our daughter’s safety was very important to us.”

Through a minimally invasive surgical technique introducing a needle inside of Lauren’s uterus by ultrasound guidance, her fetal surgery team placed nine Amplatzer vascular plugs into the chorioangioma with the intent to embolize and occlude the vessels in the placental tumor. Once the devices were deployed, they expanded to block the blood flow to the vascular tumor on the placenta. This intervention was successful, and within a few days, the vascular flow disappeared from the mass.

“This was a very novel approach for us in fetal surgery,” said Dr. Magdalena Sanz Cortes, a maternal fetal medicine surgeon at Texas Children’s Fetal Center. “Lauren was our second patient to undergo this procedure in utero to treat her chorioangioma. During her surgery, we collaborated with Drs. Henri Justino, Gary Stapleton and Athar Qureshi, our interventional pediatric cardiologists, who have used these devices extensively to treat infants with vascular tumors. Now, we are able to adapt this therapeutic approach to fetal surgery to treat vascular tumors in the placenta, thus helping to improve outcomes for both the mother and baby.”

Since Lauren’s pregnancy was still considered high-risk, she and her baby were monitored closely for any changes. At one point, her baby received a fetal blood transfusion because she became anemic. And, when doctors noticed excess fluid around her baby’s abdomen, another fetal intervention to drain that fluid was performed.

“My doctors were concerned about my baby’s lungs not being able to fully form because excess fluid was pushing the diaphragm into the abdomen which wasn’t allowing the space for the lungs to develop. So, my daughter had a paracentesis in utero to remove the fluid to allow more space for her lungs to develop. They removed half of it, and the other half slowly reabsorbed to the point where all the fluid was gone.”

By the time Lauren was 28-weeks pregnant, she had four fetal interventions over the course of a month at the Fetal Center before she returned home. Following her hospital discharge, Lauren had weekly follow-up appointments with her fetal medicine and pediatric cardiology teams to monitor her baby’s heart and make sure the blood flow in the chorioangioma was still blocked to prevent further complications. This included frequent ultrasounds and fetal echocardiograms to assess the growth of the tumor, amniotic fluid levels, fetal heart function, and fetal growth, among other factors, for early detection of problems.

On Feb. 25, 2021, Lauren delivered her daughter, Margaux, at 38-weeks at the Pavilion for Women. She was delivered via emergency C-section due to a placental abruption. Margaux spent four days in the cardiac intensive care unit followed by a few days on the pediatric cardiology floor. Today, one-month-old Margaux is doing well. She continues to see her cardiologists regularly at Texas Children’s Heart Center®.

While Lauren’s pregnancy had many ups and downs, she said what helped her get through this was trusting her medical team’s expertise and knowing they were doing everything they could to help her.

“I am so glad my OB/GYN Dr. Karolina Adam referred me to Texas Children’s,” Lauren said. My fetal intervention doctors – Dr. Sanz Cortes, Dr. Nassr, Dr. Espinoza and Dr. Shamshirsaz – and Margaux’s pediatric cardiologists, Dr. Doan and Dr. Sexson-Tejtel, were very helpful and supportive. They answered all of my questions and concerns and made sure I understood everything that was going on. My genetic counselor, Samantha Stover, was very empathetic and reassuring to us throughout this whole process. We had amazing nurses who took care of us, too. They were caring and attentive to our needs. I can’t thank them enough.”