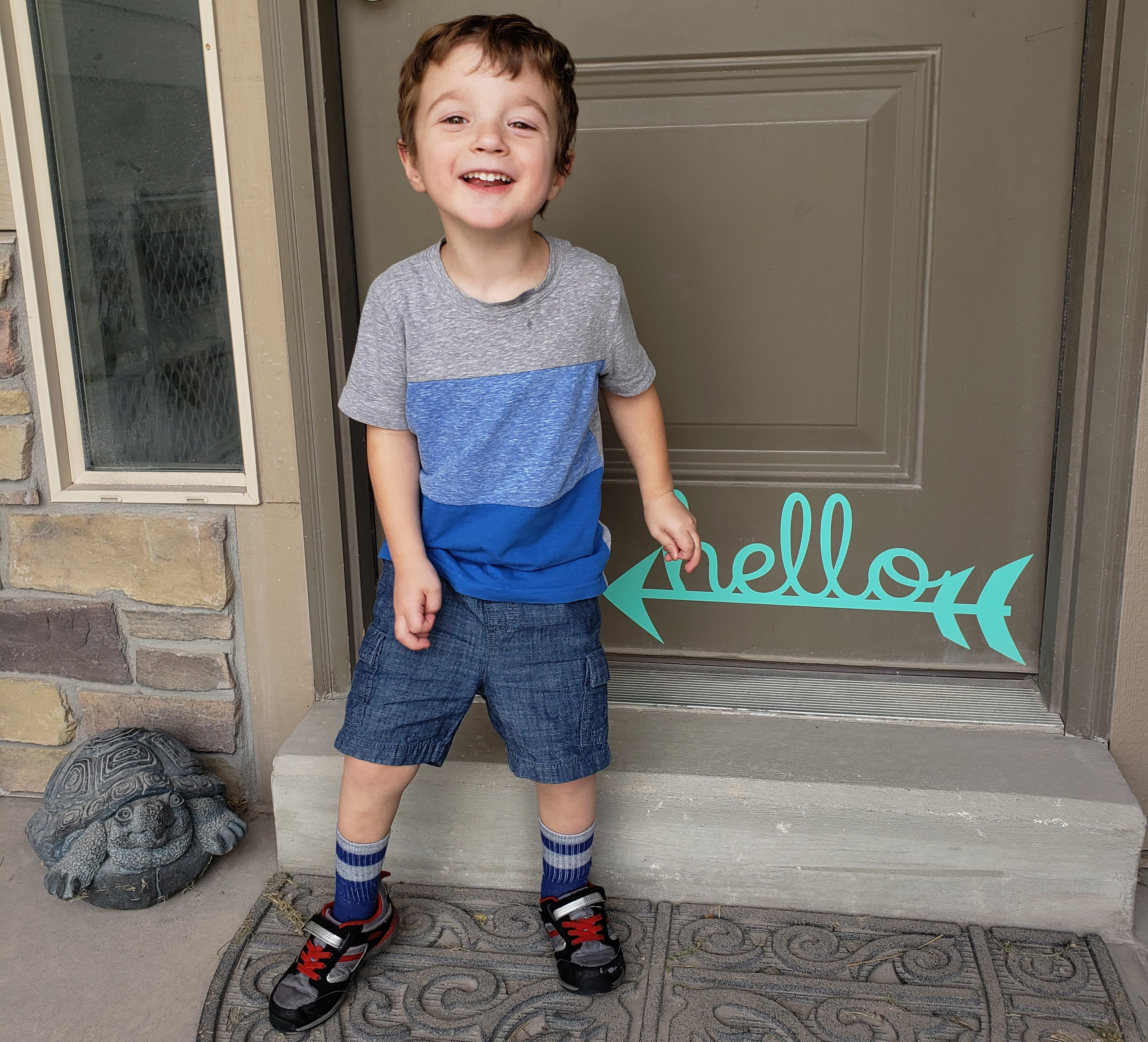 Meet Kai Christensen, a 4-year-old fighter who overcame bleak chances of survival long before he was born. Kai means unbreakable and this little boy, although only 4 years old, is already living up to his name.

"The ultrasound technician asked if we could stay in the room while the radiologist looked at the scans. I kept asking myself, if something was wrong. Finally, she came back looking nervous, which made me a little more nervous too. She then told us it looked like our sweet baby had clubbed feet,” Aleisha recalled.

Kai's foot was straight, but turned at the ankle. Feeling anxious and concerned, Aleisha and Rory quickly made terms with this bittersweet news, and chose to focus on the positive -- they were having a sweet baby boy.

A couple of hours later, Aleisha received a call from her midwife informing her the baby had something more serious than clubbed feet. She explained there was a mass on Kai's left foot that could be amniotic banding and she needed to see a specialist immediately.

"I got off the phone very confused. I kept thinking, how can amniotic fluid form into bands? It’s fluid! The next day, I set up an appointment with the specialist and waited,” Aleisha said.

At the appointment, Aleisha received the news no mother ever wants to hear: There were amniotic bands around Kai’s foot, his wrists and behind his head. Plus, her uterus was collapsing.

The specialist, Dr. Robert Ball, explained to the Christensens that there are two linings in the amniotic sac that are fused together by a sticky substance. In a normal pregnancy, these linings fuse together, but Aleisha's did not. They also learned their unborn son happened to kick through the amnion, causing the lining to break apart into the amniotic fluid and form into bands, with the sticky substance coating the bands. These bands gradually started wrapping around Kai's left ankle, right knee and around his tiny wrists, which bound his hands together. There were also bands found on the back of his head.

"I had never heard of this before, and Rory and I couldn’t believe what we were seeing," Aleisha said.

Dr. Ball further explained their options. First, they could opt for a surgical procedure to remove the bands in-utero, but the risks were high.

"I had no idea a baby this tiny could even be operated on inside the womb. Since our case was so severe and there were so many bands, there was less than a 50% chance of success and it was very possible all the bands could not be removed," Aleisha explained.

The second option would be to wait and see what happened. This option also carried risks and, to the family, was no better.

"If we waited to see what happened to our baby, there was a very strong chance he could lose his left foot since the band was so tight around his ankle. The banding could also get worse on his hands and he could lose those too. We would have no idea what limbs he would lose or if he would be stillborn because of strangulation of his neck or umbilical cord," Aleisha continued.

"Then there was our least favorite option, terminating the pregnancy. Dr. Ball basically said if we don’t terminate the pregnancy or undergo fetal surgery, we would have to slowly watch these 'death strands' take little pieces of our beautiful baby boy.”

With three heart-breaking options on the table, the Christensen family decided they would wait to see what happened.

Dr. Ball asked for their permission to consult with a colleague in Houston who sees a lot of amniotic band syndrome (ABS) cases. The couple agreed, not thinking much would happen from it.

"Our hearts were so heavy; we didn’t know how to process what we’d just seen or heard. We just went back to the car and cried, holding each other, begging God for a miracle."

To Aleisha's surprise, she received a phone call from Dr. Ball notifying her of a possible glimpse of hope. His colleague, Dr. Michael Belfort, Chairman of the Department of Obstetrics and Gynecology at Baylor College of Medicine, and OB/GYN-in-Chief at Texas Children’s Hospital had told him about an experimental procedure he was developing at Texas Children’s Fetal Center in Houston, Texas. Dr. Belfort, a fetal surgeon, had said that he might be able to operate on Aleisha’s baby boy. He wanted to see them in Texas first thing in the morning.

The experimental procedure would involve removing some of the amniotic fluid inside Aleisha’s uterus and replacing it with carbon dioxide gas. This would help with visualization of the affected areas and allow Dr. Belfort and his colleagues to resect the amniotic bands endangering Kai’s limbs and life using tiny scissors and graspers.

"My head was spinning; I was so emotionally overwhelmed. Was this really happening? Do miracles really happen this fast? I prayed at my desk and thanked my heavenly father for hearing our prayers and responding so quickly. We decided to look at this as an answer to what we should do and decided to move forward with traveling to Houston.”

The couple immediately flew from Utah to Texas Children’s where they met with experts at Texas Children's Fetal Center. More scans revealed the severity of Kai’s ABS. The umbilical cord was attached to Kai’s right knee by a band. The band was wrapping around and constricting the cord. If surgery was not performed, Kai would likely be stillbirth from cord strangulation. On the other hand, a plastic surgeon confirmed there was no nerve damage to his left foot where the banding was much worse.

“I couldn’t believe how many doctors and nurses were in that room staring in awe at my baby. I felt like a medical marvel of science.”

Dr. Belfort explained more about the surgery to the family and cautioned them about the experimental nature of the procedure which had only been done about 60 times worldwide, and on only two other babies at Texas Children's specifically. In addition, this was the first time that anyone would be doing the amniotic band resection using CO2 inside the uterus. Previously this had always been done within the amniotic fluid.

In Kai’s case, because of the extensive membrane separation it would be impossible to do the procedure “under water” and the CO2 was needed to create the space and visualization to do the procedure. Despite these challenges, the doctors felt very confident they could perform a successful fetal intervention on Kai.

After weighing the options, the couple agreed to the surgery and Aleisha was operated on that same day.

“We knew going forward with the surgery was our son's best chance. This is when we decided to name him Kai. We knew the name means strength and unbreakable, and we felt he was our fighter and would overcome the trials that faced him so early on in life.”

Aleisha had a successful surgery and began her journey toward recovery. Just three weeks after surgery, the couple was allowed to return to Utah for the rest of Aleisha’s pregnancy.

“The doctors were so impressed with Kai and how he was doing. Despite losing a lot of amniotic fluid during and after the surgery, the fluid levels rose again to an impressive level. The swelling in his left foot was also going down.”

Ecstatic, the family returned to Utah, with Aleisha on bed rest for the remainder of her pregnancy.

In January, the couple welcomed 5 lb. 2.5-ounce baby Kai, with no permanent damage to his neck, wrists or foot. Miraculously, the only damage was a nick to his right ring finger and a bit of scar tissue on his ankle. After spending almost a month in the neonatal intensive care unit, Kai was discharged home.

Now, 4-and-a-half years old, Kai loves to build with blocks, is a great artist, loves to play outside and explore, and play sports. He also loves to read and listen to music. His clubbed feet are corrected and he is thriving. 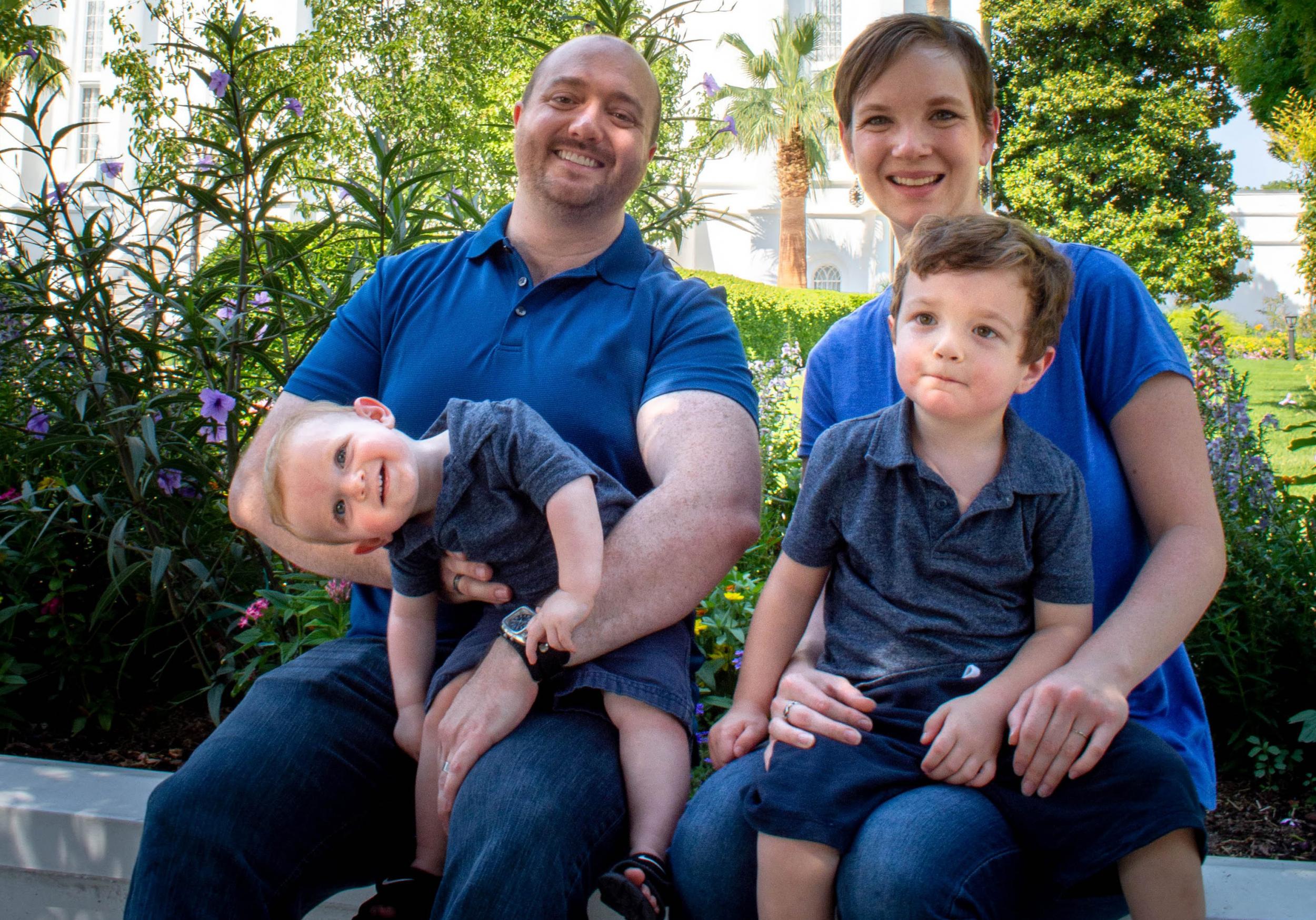 Photo: Kai and his family