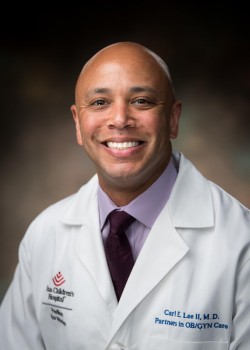 Carl E. Lee, II is a native of Houston, Texas and received his undergraduate degree from Xavier University of Louisiana where he graduated Summa Cum Laude. He received his medical degree from Baylor College of Medicine in Houston, Texas and completed his residency in Obstetrics and Gynecology with the CHRISTUS St. Joseph Hospital Residency Program. During his residency he was awarded the Joseph A. Lucci Chief Resident of the Year Award. Dr. Lee is a Fellow of the American College of Obstetrics and Gynecology and a member of the Houston Gynecological and Obstetrical Society. Dr. Lee's practice focuses on comprehensive obstetrics and gynecology. He is trained in complex gynecologic surgeries and advanced laparoscopy.