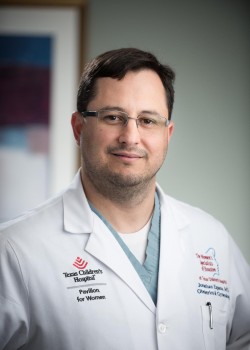 Dr. Espana was born in Venezuela and earned his medical degree from the Universidad Central De Venezuela in 1999. After moving to the United States, he completed his residency in Obstetrics and Gynecology at the University of Texas Medical Branch in Galveston, Texas, in 2009. He then continued his education and gained a Fellowship in Minimally Invasive Gynecological Surgery (Robotics and Laparoscopic surgery) in 2010 at the Methodist Hospital, Weil Cornel University, in Houston.

Dr. Espana offers compassionate care for women of all ages. Besides providing high quality and comprehensive services in general obstetrics and gynecology, he has a special interest in minimally invasive gynecologic surgery, including the use of the DaVinci Robot, as well as in the evaluation of infertile couples, endometriosis and irregular vaginal bleeding.

He is married and in his spare time enjoys traveling, running, and spending time with his family and friends.